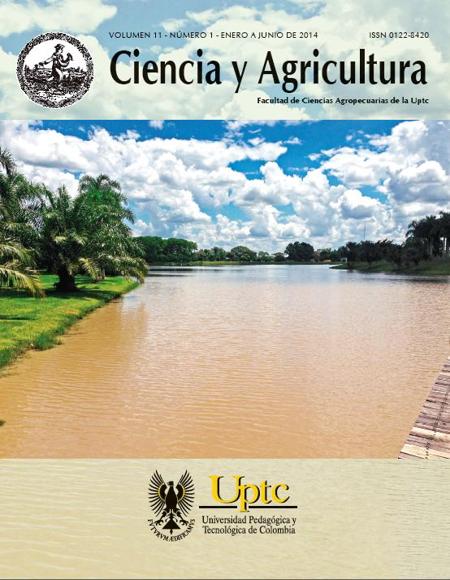 All papers included in the Revista Ciencia y Agricultura are published under  Creative Commons Attribution 4.0 International

Boyacá is one of the departments with the bigger production of yellow pitahaya in the country. There are very few studies realized on this culture, therefore the knowledge of its entomofauna is a departure point to realize new investigations, in order to identify the entomofauna associated with the yellow pitahaya culture, specially in the Briceño municipality of Boyacá department. This investigation was carried out in the pitahaya plantations in three farms. Samplings were realized using active methods, such as manual direct capture, use of network, entomological vacuum cleaner and passive methods using traps with attractives and traps of fall. The collected insects were killed by lethal chamber and then were mounted in pins for later identification under the stereoscope and with taxonomic clues. In the three farms were identified 9 orders and 58 families, of which the orders Hymenóptera and Dipteral showed the major quantity of beneficial families. At the San Pablo farm was observed the highest quantity of insects and also it was the only plantation where it was found the most restrictive pest for this culture, called Dasiops saltans (fly of the flower bud). The number of families that were found present during sampling, was more influenced by the agronomic practices implemented in each farm, than by the climatological variables, such as temperature, relative humidity and precipitation.