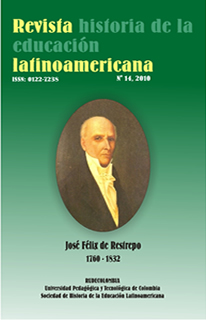 José Félix de Restrepo's career path was exceptional when compared with the rest of the enlightened figures. He was a pedagogue and a politician, the father of initiatives that lead to the enfranchisement of the slaves; he escaped the scaffold during the Spanish Reconquista. While the initiatives to introduce Enlightenment-based subject matters in the schools of Santafé were a failure, Restrepo expounded these subjects at the San Francisco de Asís Seminar College of Popoyán using a personal methodology. Later in his native Antioch he suggested initiatives in favour of the enfranchisement of the slaves. In the time of the Great Colombia he continued forwarding initiatives in favour of the slaves' enfranchisement and his participation in the construction of the Republic was decisive. This article aims at outlining Restrepo's influence as a pedagogue through his own methodology of the history of Education and ideas. The most important theoretical references are linked with the presence of the Enlightenment in New Granada, especially the catholic one, and the starting-off of a liberal discourse. We will emphasise Restrepo's participation in the task that consisted in introducing subjects influenced by the Enlightenment into schools as well as in his initiatives that attempted to give rise to the liberation of the slaves.

Enfranchisement of the slaves