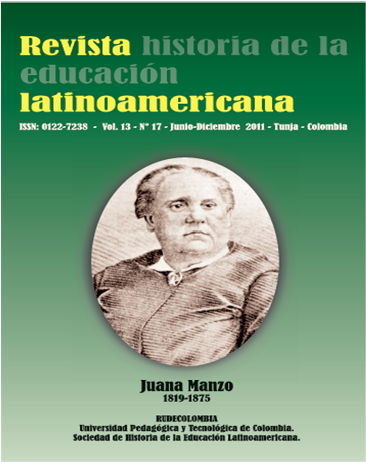 In the work one presents a state of the art being outlined the contributions and the most representative researchers of the Discursive Communities of History of the Education, among them: Argentina, Brazil, Colombia and Venezuela. The conceptual sweep we have done it being present at the Congresses of History of the Latin-American Education in the indexed countries, doing a collection of direct and indirect, primary and secondary sources, taking academic internships in some of the mentioned countries, realizing papers in national and international congresses, creating and confronting criteria it brings over from the training of academic groups to regional, national and international level, investigating in the magazines of high place I strike, establishing cooperations with academies, files and databases that they allow the subsequent development of programs of fourth and fifth level in the State Táchira. Equally, one abounds in the emergence and development of the bibliography relative to the specific topics of this work, this is, the formation (training) of academic groups, taking in it counts some of the indicators bibliométricos, to be able to state, the productivity measured across the scientific publications. Since we know the bibliometría it is a methodology that allows us to know the teleological sense of the products: where the articles go, which are, which is its impact, who, when, and where it publishes. But more than a study bibliométrico is an effort for fulfilling a metaevalución of the academic communities that are not of the public control; because of it it is important to emphasize these results, because it benefits not only the new researchers but the knowledge of the scientific advance, relevancy of the researches, and to the subjective evaluation.

it tells the history of the education.