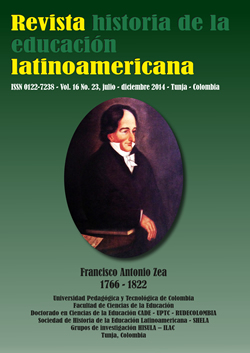 The purpose of this research is related to the creoles Zea and Valenzuela during the role of changes and participation that they presented in the period of American independence. These two new granadian creoles were joined in their scientific training and professional location, Jose Celestino Mutis and they took up the branch of the  Royal Botanic Expedition of New Granada (1783).The method focused on the social history of science and the used methodology was sustained in the compared history sustained in indicators of analysis as:formation, professional trajectory, political participation and analysis of the excellent speeches that they pronounced in the process of the independence. The sources were located in files of Spain, Colombia and Venezuela. To conclude, the political life of these two botanits is joined together in a political speech with the enlightened thinking of promoting a change in the education and the industry development
and trade where the useful sciences to the study of the natural resources of their homeland marked the course of the new design for the imaginary Nation of the creole elite of new Granade.

Journal History of the Latin-American Education